The large bowel is made up of the colon and rectum. Colorectal cancer, or bowel cancer as it is commonly known, is the third most commonest cancer in the United Kingdom after breast and lung cancer. About 30,000 new cases of bowel cancer are diagnosed every year in the UK, of which two thirds are in the colon and one third in the rectum.

Common symptoms include bleeding from the back passage, a persistent change in bowel habit, a feeling of incomplete emptying of the bowel, unexplained weight loss, abdominal pain and anaemia. None of these symptoms should be ignored, particularly if there is a family history of bowel cancer in a close relative. These symptoms can also be caused by other diseases, such as haemorrhoids, diverticular disease, inflammatory bowel disease or infections, all of which are benign conditions. Depending on your age, duration and severity of symptoms your general practitioner will arrange for further tests or referral to a colorectal surgeon.

Commonly a diagnosis of bowel cancer is made by inspection of the bowel by either a sigmoidoscopy or a colonoscopy and biopsies are taken from the growth for histological confirmation. Further tests are carried out to confirm the extent of local disease and also its spread to other organs, like the liver and lungs. Once all the necessary information is available, it is discussed in a Multidisciplinary Meeting to formulate the most appropriate treatment plan, which is then discussed with the patient.

Depending on the site of the cancer and its stage, some patients may need some other form of treatment (chemo / radiotherapy) before proceeding to surgery. The type of surgery will depend on where the cancer is located and full information, including the risks will be explained to you by the surgeon prior to surgery.

However, some times surgery may be inappropriate and other forms of treatment, including palliative care, will then be considered.

The NHS Bowel Cancer Screening Programme is now well established across the UK. The aim is to diagnose cancers early and treat pre-cancerous growths, such as polyps, before they turn malignant.

More information is available on the following websites:
www.cancerscreening.nhs.uk/bowel/
www.cancerhelp.org.uk/type/bowel-cancer/ 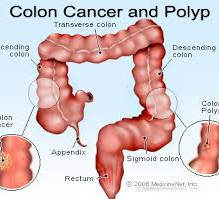