The thyroid gland is a structure in the neck which produces a hormone called Thyroxine which regulates the body’s metabolism. Sometimes the gland may not produce enough hormone (hypothyroidism / underactive thyroid) and on other occasions it may produce too much hormone (hyperthyroidism / overactive thyroid). At other times the gland may enlarge in size to produce a lump in the neck (goitre). Your general practitioner will arrange for basic tests and refer you to see either an endocrinologist or an endocrine surgeon, depending on the exact nature of your thyroid symptoms.

Treatment depends on the exact nature of your thyroid problem which may either be taking medication or an operation.

We perform the operation under a general anaesthetic and it usually involves only an overnight stay in hospital. Latest techniques, including ultrasonic (Harmonic) scissors are used for the operation which results in very low blood loss and rapid recovery. The wound in the neck , which is about 5 cms long in the line of a skin crease, is closed with glue to avoid any marks on the skin from stitches. Most patients are able to eat and drink normally a few hours after the operation. 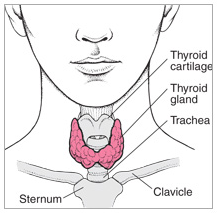